A few days ago I was walking around Paul (Portugal) in the evening, when suddenly something caught my eye. It is a curious and nice animal, the salamander. This creature was all black with a lot of yellow spots on its skin (picture 1). It was an example of the Fire Salamander  (Salamandra salamandra) species. I would like to tell you something about this bizarre-looking animal.

Fire salamanders are a very popular European species of amphibian. It is said that their name was given to them by Europeans that thought they came from fire. They are distributed over a vast area extending from central and southern Europe to eastern Europe. They live in a range of habitats which vary, depending on the subspecies. There are a lot of different subspecies of fire salamanders which all vary in their size, colour and patterns, but generally fire salamanders are sturdy looking amphibians with a variety of yellow to orange markings on their back.

Ecology Like all amphibians, fire salamanders spend part of their lives in water. As adults they are poor swimmers, but their larvae need to spend the first 3 months in water (breathing through gills) before metamorphosing into tiny brightly coloured adults and leaving their aquatic birthplace. Most of these salamanders inhabit moist woodlands where they like to hide under rocks and logs. Although the adults are terrible swimmers, they are never far from the freshwater streams and small pools in which they begin their lives. Fire salamanders are most active at night, but can be found out and about on damp, overcast days.

Feeding Fire salamanders are very good feeders and will feed on live food almost as soon as they are born. As previously mentioned most fire salamanders give birth to larvae, which can immediately feed on aquatic foods such as protozoa, crustaceans, daphnia, shrimps, worms, and insect larvae in the wild. When they are young, they are quite active and eat a large amount of food to help them develop. When they finally leave the water to join their parents and others on the land, their diet changes to small invertebrates such as woodlice, slugs, earthworms, centipedes and crickets. As they grow, they start to gradually increase the size of their prey. They sometimes even grow large enough to eat small vertebrates such as amphibians and rodents. They usually hunt at night but are sometimes seen in the day, often when it rains. They catch their prey by using two techniques depending on the speed of the prey. If they catch a slow-moving animal, they will snap at it; if the prey is fast, they will flick out their tongue.

National distribution In Portugal, this species can be found from sea level up to the plateau of the Serra da Estrela. In particolar, we can find two subspecies: Salamandra salamandra gallaica (Seoane 1884) (picture 2), which occupies the entire northern territory of the hydro-graphic basin of the Tejo; and Salamandra salamandra crespoi  (Malkmus 1983) (picture 3), present in the Algarve hills and in the southwest of the Alentejo. Although not confirmed, it is likely that the S. salamandra morenica (Joger & Steinfarz 1994), occupies part of the basin of the Guadiana river. 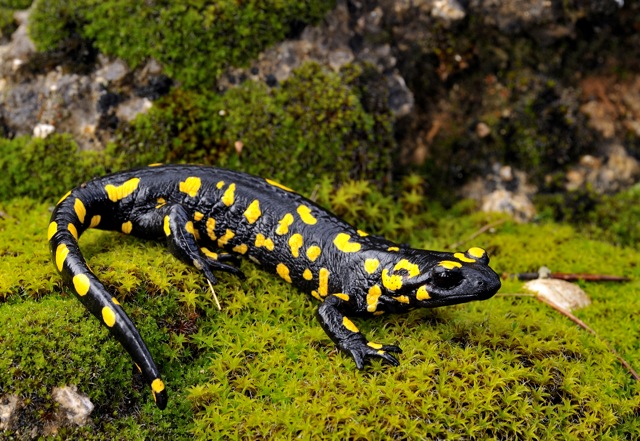 (P. 2) S. s. gallaica: this subspecies usually has a lot of spots which are in the shape of spirals, horse shoes and hooks. They often have red spots and the throat and head may be dusted with red. They have a pointed snout and can growup to 28cm in length. 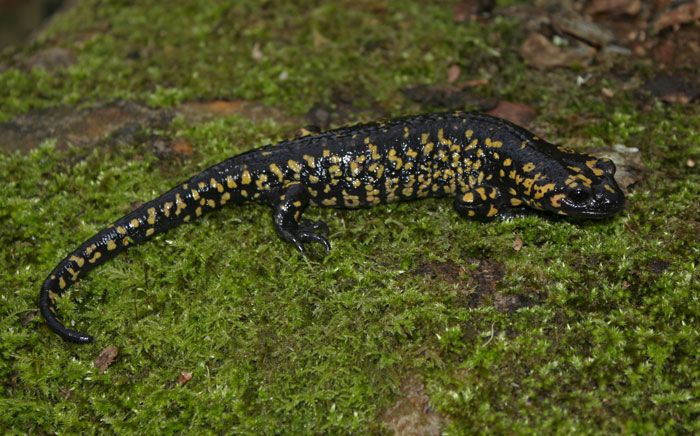 (P.3) S. s. crespoi: this subspecies is very similar to S. s. gallaica in shape and size but has very small yellow spots along the lateral flanks. They also have a pointed snout and can grow up to 28cm in length.

One reason to look at salamanders is that these amphibians are actually sensitive bioindicators of environmental quality. These salamanders are extremely sensitive to changes in their environment and their health is often directly linked to the health of their habitat.

What makes salamanders so susceptible to changing environmental conditions? A close look at their skin and eggs can give us an answer.

Because salamanders, like all amphibians, lay their eggs in the water, their eggs don’t have a protective shell like, for example, chicken eggs. This makes the salamander eggs vulnerable to chemical pollutants, ultraviolet radiation, and other factors that disrupt cell division in the early stages of the embryo. As a result, the embryo may not be able to develop properly, and it will die. Even when the eggs hatch, the salamanders stay sensitive to their environment. Salamanders, like all amphibians, have a permeable skin; gases and water simply enter or leave the body through this skin. This permeable skin, however, provides little or no protection from toxins in the soil or in the water. With the water and gases that go through the skin, the salamander also takes in toxins. This way, amphibians are environmental sponges, soaking up the chemicals and toxins from the water or air around them.

Amphibians have been around for 350 million years, but recent developments are causing a worldwide decline.  Habitat loss, acid rain and environmental contaminants, ultraviolet radiation, and invasive species directly affect salamander and other amphibian populations. And what is most mysterious to researchers, even in pristine, protected areas like nature preserves and national parks, salamander populations are decreasing.