Walking around Paul you can see a lot of fennel plants (Foeniculum vulgare), in particular they are placed over the street toward the Master Unit (picture 1) and also in the building (picture 2). The fennel is very important for its health benefits, also it is very used for culinary reason. Today I would like to talk to you about this really important and versatile plant. 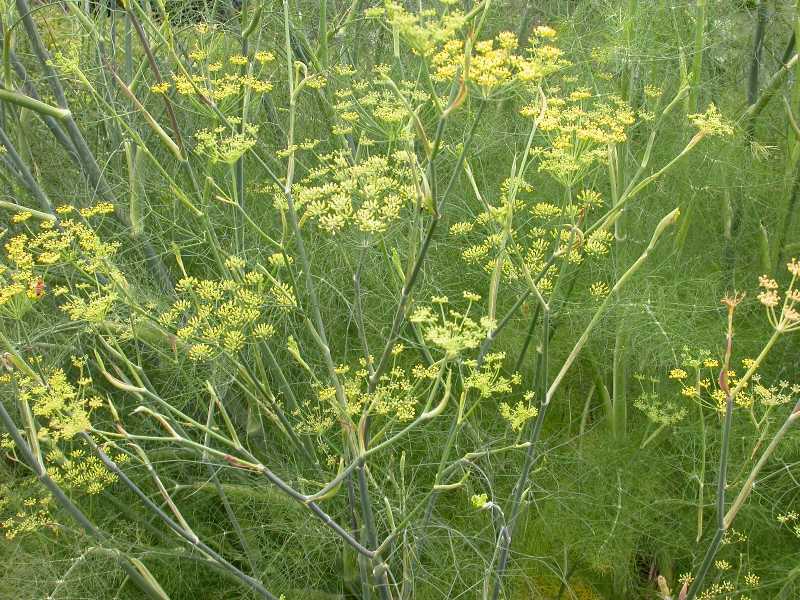 Fennel  is a perennial herb, with stem erect, glaucous green, and grows to heights of up to 2.5 m, with hollow stems. It is composed of a white or pale green bulb from which closely superimposed stalks are arranged. The stalks are topped with feathery green leaves near which flowers grow and produce fennel seeds. The bulb, stalk, leaves and seeds are all edible. Fennel belongs to the Umbellifereae family and is therefore closely related to parsley, carrots, dill and coriander. Fennel’s aromatic taste is unique, strikingly reminiscent of licorice and anise, so much so that fennel is often mistakenly referred to as anise in the marketplace. Fennel’s texture is similar to that of celery, having a crunchy and striated texture. 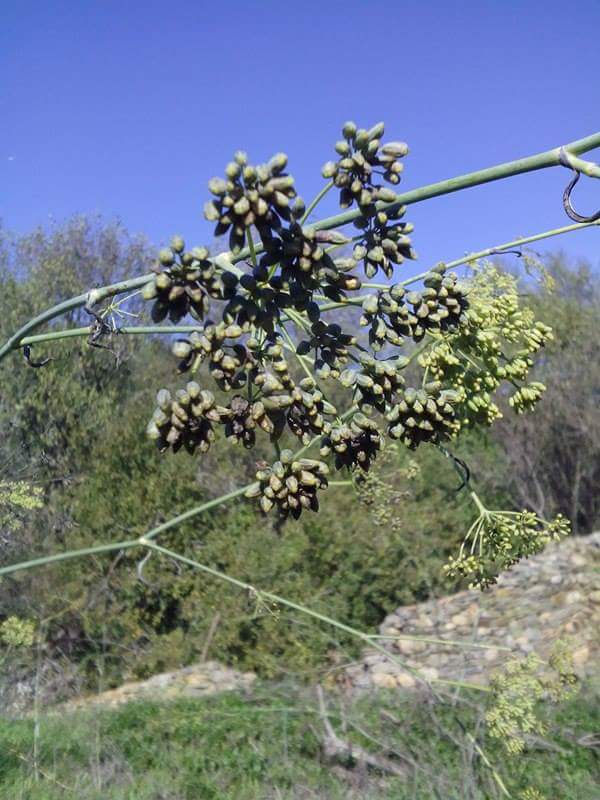 History Ever since ancient times, fennel has enjoyed a rich history. The ancient Greeks knew fennel by the name “marathron”; it grew in the field in which one of the great ancient battles was fought and which was subsequently named the Battle of Marathon after this revered plant. Fennel was also awarded to Pheidippides, the runner who delivered the news of the Persian invasion to Sparta. Greek myths also hold that knowledge was delivered to man by the gods at Olympus in a fennel stalk filled with coal. Fennel was revered by the Greeks and the Romans for its medicinal and culinary properties. Fennel has been grown throughout Europe, especially areas surrounding the Mediterranean Sea, and the Near East since ancient times. Today, the United States, France, India and Russia are among the leading cultivators of fennel.

Health Benefits Fennel acts as an excellent digestive aid to relieve abdominal cramps, gas and bloating. Fennel seeds (as well as anise) contain creosol and alpha-pinene, chemicals that help to loosen congestion and calm the dry cough of bronchitis. Like many of its fellow spices, fennel contains its own unique combination of phytonutrients (including the flavonoids rutin, quercitin, and various kaempferol glycosides), that give it strong antioxidant activity. The most fascinating phytonutrient compound in fennel is the anethole, the primary component of its volatile oil. In animal studies, the anethole in fennel has repeatedly shown to reduce inflammation and to help prevent the occurrence of cancer.

In addition to its unusual phytonutrients, fennel bulb is an excellent source of vitamin C (picture 3). Vitamin C is the body’s primary water-soluble antioxidant, able to neutralize free radicals in all aqueous environments of the body. If left unchecked, these free radicals cause cellular damage that results in the pain and joint deterioration that occurs in conditions like osteoarthritis and rheumatoid arthritis. The vitamin C found in fennel bulb is directly antimicrobial and is also needed for the proper function of the immune system. As a very good source of fiber, fennel bulb may help to reduce elevated cholesterol levels. And since fiber also removes potentially carcinogenic toxins from the colon, fennel bulb may also be useful in preventing colon cancer. In addition to its fiber, fennel is a very good source of folate, a B vitamin that is necessary for the conversion of a dangerous molecule called homocysteine into other, benign molecules. At high levels, homocysteine, which can directly damage blood vessel walls, is considered a significant risk factor for heart attack or stroke. Fennel is also a very good source of potassium, a mineral that helps lower high blood pressure, another risk factor for stroke and heart attack. 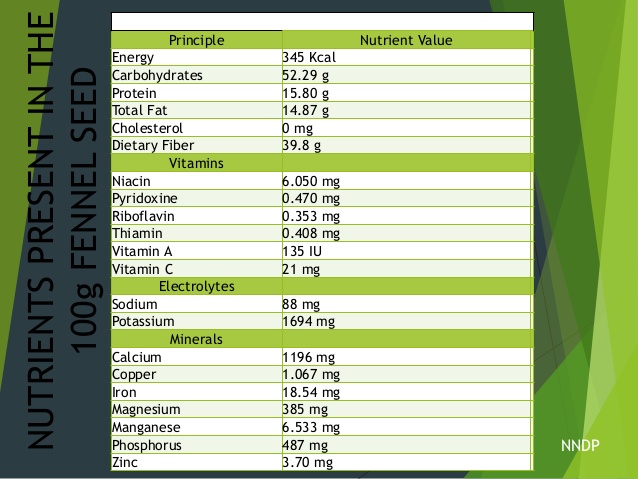 Picture 3. This chart graphically shaws nutrients present in the 100g fennel seed. Fennel is an excellent source of vitamin C. It is also a very good of dietary fiber, potassium, molybdenum, manganese, copper, phosphorus, and folate. In addition, fennel is a good source of calcium, pantothenic acid, magnesium, iron, and niacin.

How to grow fennel

Fennel will thrive anywhere, but needs its own space to grow, apart from the main garden. Fennel plants release a chemical, (anethole) that impairs the growth of some other plants, so it should not be grown very close to beans, tomatoes or cabbage family plants. Fennel grows well in its own big container in a rich soil. It is easily propagated by seeds, sown early in the year, and is frost resistant. You can direct sow, or transplant, about a foot or so apart. Fennel thrives in dry and sunny places that remind it of it’s mediterranean home. Harvest the leaves anytime, and the bulbs when large enough. Keep flower heads cut to insure a supply of green leaves, or let flower heads mature to harvest seeds when ripe.

In many European nations, especially in France and Italy fennel plays an important role in topical cuisine. Fennel’s history dates back to the earliest times and is mentioned in many texts and mythological traditions of world’s cultures. Fennel is crunchy and slightly sweet, adding a refreshing contribution to our popular Mediterranean cuisine. Infact it is well known to cooks, all parts of the plant are edible: stalks, leaves, bulbs and seeds. The fresh stems of fennel can be eaten much like celery, and fresh leaves can be used as flavoring in soups and sauces. The bulbs are tipically used in Italian dishes, and the seeds are most often taken as a  tea, infact fennel seeds make an excellent tea. fennel oil has a very sweet, earthy aroma almost identical to anise. Also it relieves muscular or rheumatic pains and is especially effective in massage blends.

Talking of mediterranean cousin, I would like to share with you one of the most popular sicilian recipes with the fennel ingredient: Biscotti della monaca (nun’s cookies)

This name was given to them because these cookies were made by nuns, and the S form (picture 4) to help children to learn the alphabet in a way more simple and immediate.

Pour all the ingredients in the mixer and process them quickly, then picked up the dough and place in refrigerator for 30 minutes. After this time, roll out the dough and cut strips of 8 cm and 1 cm wide, make the S forms and place them on baking sheet lined with parchment paper, bake in preheated oven at 250 ° C for 10 minutes. Remove the cookies from the oven, let them cool and put them again in the oven for 15-20 minutes at 160 ° C to make them cookies. 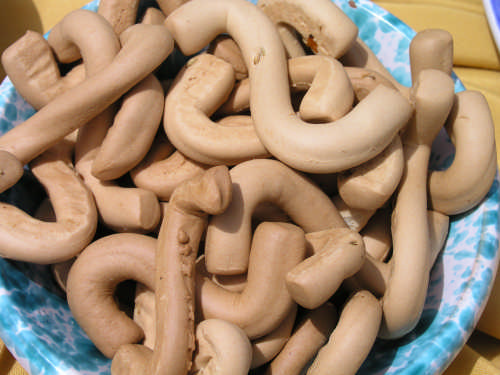