More than 4.000 naturally occurring minerals (inorganic solids that have a characteristic chemical composition and specific crystal structure) have been found on Earth. They are formed of simple molecules or individual elements arranged in repeating chains, sheets, or three-dimensional arrays. Minerals are typically formed when molten rock, or magma, cools, or by separating out of mineral-rich water, such as that in underground caverns. In general, mineral particles are small, having formed within confined areas such as lava flows or between grains of sediments. Rocks themselves are made of clusters or mixtures of minerals, and minerals and rocks affect land development and form natural resources such as gold, tin, iron, marble, and granite. 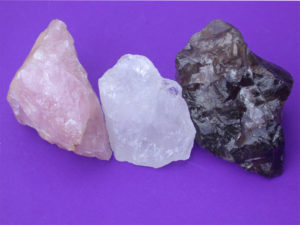 In this article I will talk to you about quartz, one of the most abundant minerals on Earth. First, I will start by talking about granite (rock rich in quartz) of Serra da Estrela National Park (Portugal).

The Serra da Estrela, the higest mountain range in continental Portuagal, is situated in central-east Portugal and a large part of the mountain lies within the limits of the Parque Natural da Serra da Estrela. The Park covers around 100,000 ha and is administered by six municipalities: Seia, Gouveia, Celorico da Beira, Guarda, Manteigas and Covilhã. These are included in two districts: in the north the Guarda district and in the south the Castelo Branco district.

The mountain consists mainly of granitic rock in its central part, and schists in its periphery.  Granite is a common type of intrusive igneous rock that is granular and phaneritic in texture. These rocks mainly consist of feldspar, quartz, mica, and amphibole minerals, which form an interlocking, somewhat equigranular matrix of feldspar and quartz with scattered darker biotite mica and amphibole peppering the lighter color minerals.

At the Serra da Estrela Natural Park, in the area with granitic substrate (peripheral zone of the upper plateau), there is a significant diversity of forms of granitic rock, resulting from chemical and mechanical alteration of the rock. During an excursion you can admire the large forms (bornhardts, castle koppies, nubbins, bolas graniticas), that are the most common and easier to see (picture 1). Also, you can observe the medium and smaller forms: pias (picture 2), tafoni, polygonal cracking and surfaces of pseudostratification. 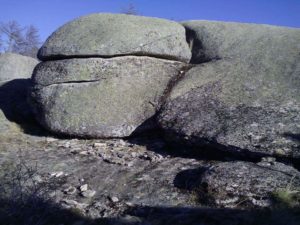 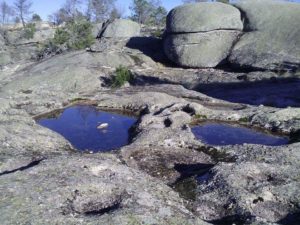 Picture 2. Pias, characteristic forms of the granitic morphology. Pias are little cavities formed on horizontal surfaces of granite blocks due to erosion, caused by water retention or slots in the blocks. (Pedra do Urso).

The mineral Quartz
One of the main minerals of granitic rocks is quartz (20-60%). Quartz is one of the most well-known minerals on earth; its chemical composition consists of one part silicon and two parts oxygen (silicon dioxide, SiO2). It occurs in basically all mineral environments (Sedimentary, metamorphic, and igneous rocks), and its visual appearance reflects the various conditions under which it was formed. While the majority of quartz crystallizes from molten magma, much quartz also chemically precipitates from hot hydrothermal veins as gangue, sometimes with ore minerals like gold, silver and copper. Quartz is highly resistant to both mechanical and chemical weathering; this durability makes it the dominant mineral of mountaintops and the primary constituent of beach, river and desert sand.

Quartz is also the most varied of all minerals, occurring in all different forms, habits, and colors (pictures 3-4). If pure (clear quartz), it is colorless, transparent, and very hard crystalline material of glass-like look. It also occurs in dense forms with no visible crystals, like the multi-colored agate and the gray flint. There are more variety names given to quartz than any other mineral (amethyst, citrine, rose quartz, smoky quartz, milky quartz, and others). Although the feldspars as a group are more prevalent than quartz, as an individual mineral quartz is the most common mineral. 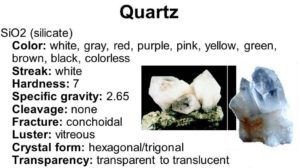 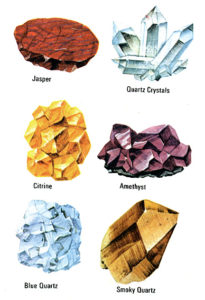 Picture 4. Some varieties of quartz.

Quartz is one of the most useful natural materials. Its usefulness can be linked to its physical and chemical properties. It has a hardness of seven on the Mohs Scale which makes it very durable. Luster, color and diaphaneity of quartz, make it useful as a gemstone and also in the making of glass. It has electrical properties and heat resistance that make it valuable in electronic products. In fact, quartz crystal is valued for its piezoelectric and pyroelectric properties, by which it can transform mechanical pressure or heat into electromagnetic energy, and vice versa. Its ability to focus, amplify, store and transform energy is used throughout the technology world in ultrasound devices, watches, microphones, radio transmitters and receivers, memory chips in computers and other electronic circuitry.

The same properties of energy amplification, programmability and memory also make clear quartz the most versatile and multidimensional stone in the mineral kingdom for healing, meditation, expansion of consciousness, attracting love or prosperity and other. It is claimed, also, that it brings strength and clarity to the intellect, aiding concentration and memory retention, and filtering out distractions. Its hypnotic quality is conducive to sleep, helping one to understand the messages and lessons conveyed during the dream state.

Crystals, also, are professional support stones for artists, stylists, doctors and healers, inventors, musicians, and those who work in media. Quartz, finally, is an ideal component of precise scientific equipment, such as telescope and microscope lenses, and it is an unsurpassed conductor of heat, light, and ultraviolet rays.

In the light of this, quartz is certainly the most versatile of all known minerals. Because of its technical importance, its abundance, its role in geologic processes and much more, quartz is probably the best-studied of all minerals.