Art as an educational tool 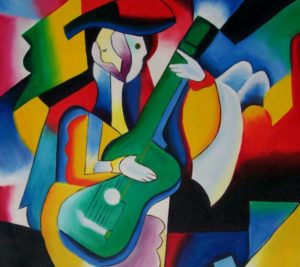 After participating in the activities organized by Ananda Kalyani-Master Unit, in which three classes of students from St Dominic’s International School of Lisbon were hosted, and after realizing how much they appreciated the initiative and how important was it for them to learn in a different way from the learning modality they are used to inside the school walls, I started thinking about the role that the creative and artistic activity has in the educational path. I have developed a line of reasoning to understand what the relationship linking the artistic practice and the personal development of the individuals is, trying to understand in particular if and how the former can  somehow enhance the learning process. I’ve found several interesting thoughts and points of view  that suggest a reconsideration of the current educational system. The metaphoric reflection by Robinson, brilliant English educator and pedagogues, is particularly interesting, as it represents a certain analogy with Ananda Kalyani’s concept: it proposes to evolve from an educational system based on an “industrial” model, to one based on “agricultural principles”.

In the last decades, in the philosophical and pedagogical literature, several studies about the connection between the artistic activities and the development of cerebral capabilities of the individual during childhood have been conducted.

It’s possible to find many contributions from which a connection between the practice of artistic activities, the communication abilities and the physical-cognitive-emotional development during childhood arises. Those studies, that are going to be summarized hereafter, seem to demonstrate that, from the very first years of life of the child, art contributes to improve the expressive capabilities, to support the logical learning, to advance the self-awareness and to enhance the creative potentialities.

Art and creativity seem to unroll a fundamental role in the field of childhood evolution, and their practice during the learning process seem to be as important as the practice of the other subjects in order to fully develop the human potential, but, for some reasons, both of them are barely considered by institutions. Inside the school’s educational programs, artistic disciplines are considered secondary compared with the others, and undeniably the development of the left cerebral area, the one which controls rationality, is preferred to the right area, emotional and creative core. As Ken Robinson (2006) asserts, every educational system in the Earth has the same hierarchy of subjects. At the top are mathematics and languages, then the humanities and at the bottom the arts.

Robinson (2009) also underlines a really interesting concept, that human communities depend upon a diversity of talent, not just upon a singular conception of ability. Human talent is tremendously diverse, people have so many different attitudes. Kids prosper best with a broad curriculum that celebrates their various talents, not just a small range of them.

Arts are important because they speak to those parts of children which are otherwise untouched. It’s fundamental to leave the children free to explore their artistic and creative talents and it is desirable that the scholastic programs reserve a significative role to the teaching and practice of artistic disciplines.

Connections between art and education

Art, in its various forms (visual arts, music, theatre, dance etc.), engage all the senses and reinforce the cognitive, socio-emotional and multi-sensorial competences. During the growth of the individual, artistic activity influence the development of  habilities, creativity, self-confidence, favourishing the interaction with the external world and fournishing a number of habilities that enhance the expression and the comunication.

In the first half of the ‘900, John Dewey (1934), influential philosopher and pedagogist asserted with certainty the idea that art was the most useful means to use, in a constructive way, the creative energy held in the child. In Dewey’s conception, art should not be considered as an independent experience, but it should be considered together with the psycology of each individual and the socio-cultural realities from which it originates. He underlines how the aim of the creative activity should not be the artifacts realized, but rather the whole process which comprehends the capability to observe, the imagination and the mnemonic abilities, that art contributes to develop and that give the individual good critical and problem solving capabilities.

Maria Montessori (1987, 1992) developed a similar conception of “experience”, where doing an action represents the external manifestation of the though. In her conception, the sensorial experience, typical of the artistic production, assumes a central role in the evolution of the child. The hand could be considered like a prothesis of the mind. Montessori asserted that the artistic activity was a way of thinking and that visual perception and though were strongly connected. The creative work, during its implementation, develops many cognitive capabilities and a child engaged in paint, write, dance, play ecc. is simply thinking with his/her senses.

It’s really interesting to consider also the conception of Erik Erikson (1950), who divides the development of the individual in eight stages, four of which are relative to the childhood period. He uses the concepts of cognitive, emotional, social and  motoric development, asserting that in each of these fields, children should make several different experiences in order to become healthy, happy and productive adults.

This conception has been enhanced, in a more recent age, by Elliot Eisner (1976), who studied during his career the role of art inside the scholastic educational paths. For this author art could be considered as a fundamental teaching tool inside the development of the individual. Referring to the four concepts used by Erikson, he found out what follows.

From the emotional point of view, art:

From the social development point of view, art:

Towards a new model of education

Art unrolls an irreplaceable role inside the individual growth and the social integration, transmitting children those competences that will be useful in order to face their life and to contribute with their own personality, to build a better civil society.

Art and creativity are concepts that should not be considered as characteristics reserved to a few “lucky” people. As Gardner (1989) observes, creativity can be considered as a common endowment  in each individual, that can be shown in different forms and ways. The etymology of the term “creativity” derives from the latin “to create”, and for most of the pedagogues and psychologists, it’s not just talent and imagination, but above all it implies the capability to put ideas into practice. Creativity actually can be taught and developed and it can be positively influenced by favorable contextual factors as well as inhibited by conditions that obstruct its full development, relegating them just as potentialities.

Children should have the opportunity to make art and to develop their own creative potential, finding space to freely express their own individuality, learning to solve problems in new and innovative ways, producing heterogeneous contributions. This is a fundamental step for a society that wants to enhance its human capital and take advantage of it in order to face the new challenges.

In the traditional educational system mistakes are the worst thing we can make. We educate people to give the correct answers and to follow determined reasoning processes, running out of their creative capabilities. But in such a way, if children are not prepared to be wrong and to try different solutions, they will never come out with something original and they will never contribute to innovation.

Using a really effective metaphor, Robinson (2009) resumes what is mainly needed by the educational system in order to improve the way through which it can enhance the human potential at disposition. “We have to move from what is essentially an industrial model of education, which is based on linearity, conformity and batching people, to an educational model based on the principle of agriculture. Human flourishing is not a mechanical process, it’s an organic process. We can’t predict the outcome of humans development, all we can do is, like farmers, create the conditions under which they will begin to flourish”.

Robinson K., 2009 The Element: How finding your passion change everything, Viking, New York