Common hawthorn (Crataegus monogyna) is a deciduous tree native in the UK and across Europe. Also known as the May-tree, due to its flowering period, it is the only British plant named after the month in which it blooms. 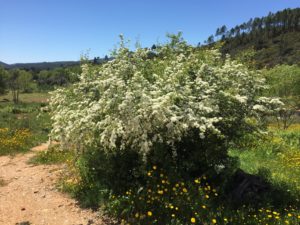 Overview: mature trees can reach a height of 15m and are characterised by their dense, thorny habit, though they can grow as a small tree with a single stem. The bark is brown-grey, knotted and fissured, and twigs are slender and brown and covered in thorns. It often hybridises with the UK’s other native hawthorn, Midland hawthorn (Crataegus laevigata). Both species are similar and can be hard to tell apart.

Leaves: around 6cm in length and comprised of toothed lobes, which cut at least halfway to the middle or ‘mid-rib’. They turn yellow before falling in autumn.

Flowers: hawthorns are hermaphrodite, meaning both male and female reproductive parts are contained within each flower. Flowers are highly scented, white or occasionally pink with five petals, and grow in flat-topped clusters.

Fruits: once pollinated by insects, they develop into deep red drupes known as ‘haws’. The haws can be eaten raw but may cause mild stomach upset. They are most commonly used to make jellies, jams, and wines.

Habitat: Broadleaf woods, coppices, scrub. It also has long been used as a hedging plant and is a popular choice in wildlife gardens.
Flowering time: June.
Endangerment: Vulnerable.

Common hawthorn can support more than 300 insects. It is the foodplant for caterpillars of many moths. Its flowers are eaten by dormice and provide nectar and pollen for bees and other pollinating insects. The haws are rich in antioxidants and are eaten by many migrating birds such as redwings, fieldfares and thrushes, as well as small mammals. Also, the dense thorny foliage makes fantastic nesting shelter for many species of bird. However hawthorn may be subject to certain threats, in fact it may be prone to aphid attack, gall mites and the bacterial disease, fire blight. 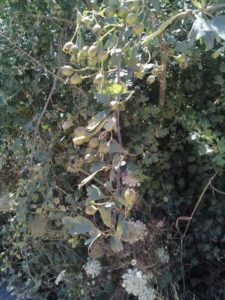 Crataegus monogyna is one of the most common species used as the “hawthorn” of traditional herbalism, which is of considerable interest for treating cardiac insufficiency by evidence-based medicine. The plant partes used medicinally are usually sprigs with both leaves and flowers, or alternatively the fruit. It is also a good source of antioxidant phytochemicals. 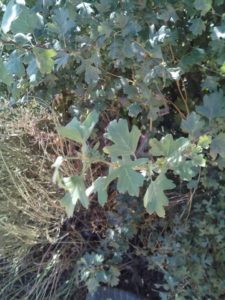 Common hawthorn is extensively planted as a hedge plant, especially for agricultural use. The traditional practice of hedge laying is most commonly practised with this species. Numerous hybrids exist, some of which are used as garden shrubs. The most widely used hybrid is C. × media (C. monogyna × C. laevigata), of which several cultivars are known, including the very popular “Paul’s Scarlet” with dark pink double flowers.

Mythology and symbolism
In Britain, it was believed that bringing hawthorn blossom into the house would be followed by illness and death, and in Medieval times it was said that hawthorn blossom smelled like the Great Plague. Botanists later learned that the chemical trimethylamine in hawthorn blossom is also one of the first chemicals formed in decaying animal tissue, so it is not surprising that hawthorn flowers are associated with death.