Bats are mammals of the order Chiroptera and make up one-fifth of the mammal population on Earth, according to Bat Conservation International. Bats are the second largest order of mammals (after the rodents), representing about 20% of all classified mammal species worldwide with about more than 1,300 bat species in the world. 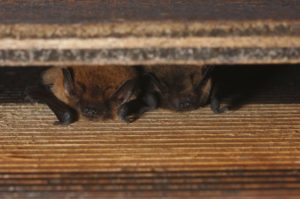 Bats can be as large as a small dog or as small as a bee. The largest bats are the flying foxes with wingspans of up to 2 metres and a body weights of up to 1.5 kilograms. At the other end of the scale is the bumblebee bat, weighing only 2 grams, the world’s smallest mammal.Traditionally, bats are divided into two major groups: Megachiroptera or megabats (sometimes called fruit bats or flying foxes) and Microchiroptera or microbats.

The place a bat lives is called its roost. Bats need different roosting conditions at different times of the year and they will often move around to find a roost that meets their needs. Some bats prefer hollow trees, some like caves and some use both at different times. Many bats shelter in buildings, behind hanging tiles and boarding or in roof spaces. For several weeks in summer, female bats gather in a maternity roost to have their babies. In winter, bats use hibernation roosts.

Bats are not blind, they can see almost as well as humans. But to fly around and hunt for insects in the dark, they use a system much more important to them than their eyesight, a remarkable high frequency system called echolocation. The bat can tell how far away something is and how long it takes the sounds to return to them. These calls are usually pitched at a frequency too high for adult humans to hear naturally. Human hearing ranges from approximately 20Hz (cycles per second) to 15 to 20 kHz (1000Hz) depending on age. In comparison, some bats can hear sounds up to 110 kHz in frequency. By emitting a series of often quite loud ultrasounds that either sweep from a high to low frequency or vary around a frequency, bats can distinguish objects and their insect prey and therefore avoid the object or catch the insect. Individual bat species echolocate within specific frequency ranges that suit their environment and prey types. This means that we can identify many bats simply by listening to their calls with bat detectors. 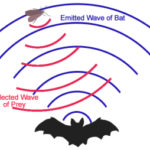 The Earth without bats would be a very different and much poorer place. Bats around the world are playing ecological roles that are vital to the health of natural ecosystems and human economies. Many of the more than 1,300 bat species consume vast amounts of insects, including some of the most damaging agricultural pests. Others pollinate many valuable plants, ensuring the production of fruits that support local economies, as well as diverse animal populations. Fruit-eating bats in the tropics disperse seeds that are critical to restoring cleared or damaged rainforests. Even bat droppings (called guano) are valuable as a rich natural fertilizer. Guano is a major natural resource worldwide, and, when mined responsibly with bats in mind, it can provide significant economic benefits for landowners and local communities.

Bats are often considered keystone species that are essential to some tropical and desert ecosystems. Without bats’ pollination and seed-dispersing services, local ecosystems could gradually collapse as plants fail to provide food and cover for wildlife species near the base of the food chain. Also, some bats are bioindicator species, because they help measure the quality of environment. The indicators show changes in aspects of biodiversity such as the population size of important species or the area of land managed for wildlife.

I love bats because mosquitoes love to bite me! According to Bat Conservation International, one little brown bat can eat 60 medium-sized moths or over 1000 mosquito-sized insects in one night. For this reason, but mostly to help bats’ conservation, you can build a bat box (how to build a bat box). Ideally they would live in a natural home but we make bat houses to help those who can’t find space in a forest. In fact, because of habitats’ reduction, many bats currently are at risk of extinction. 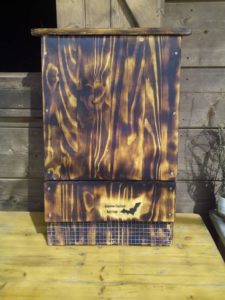 The decrease in bat numbers mirrors the ever-changing countryside. Natural habitats such as hedgerows, woodlands and ponds have been declining and fragmenting. Loss of habitat, the use of pesticides and intensive farming practices have lead to a reduction in the abundance of insects which the bats rely on as their only food source.  So, it is important that we create new suitable habitats and manage and enhance existing habitats to help bats recover and survive.