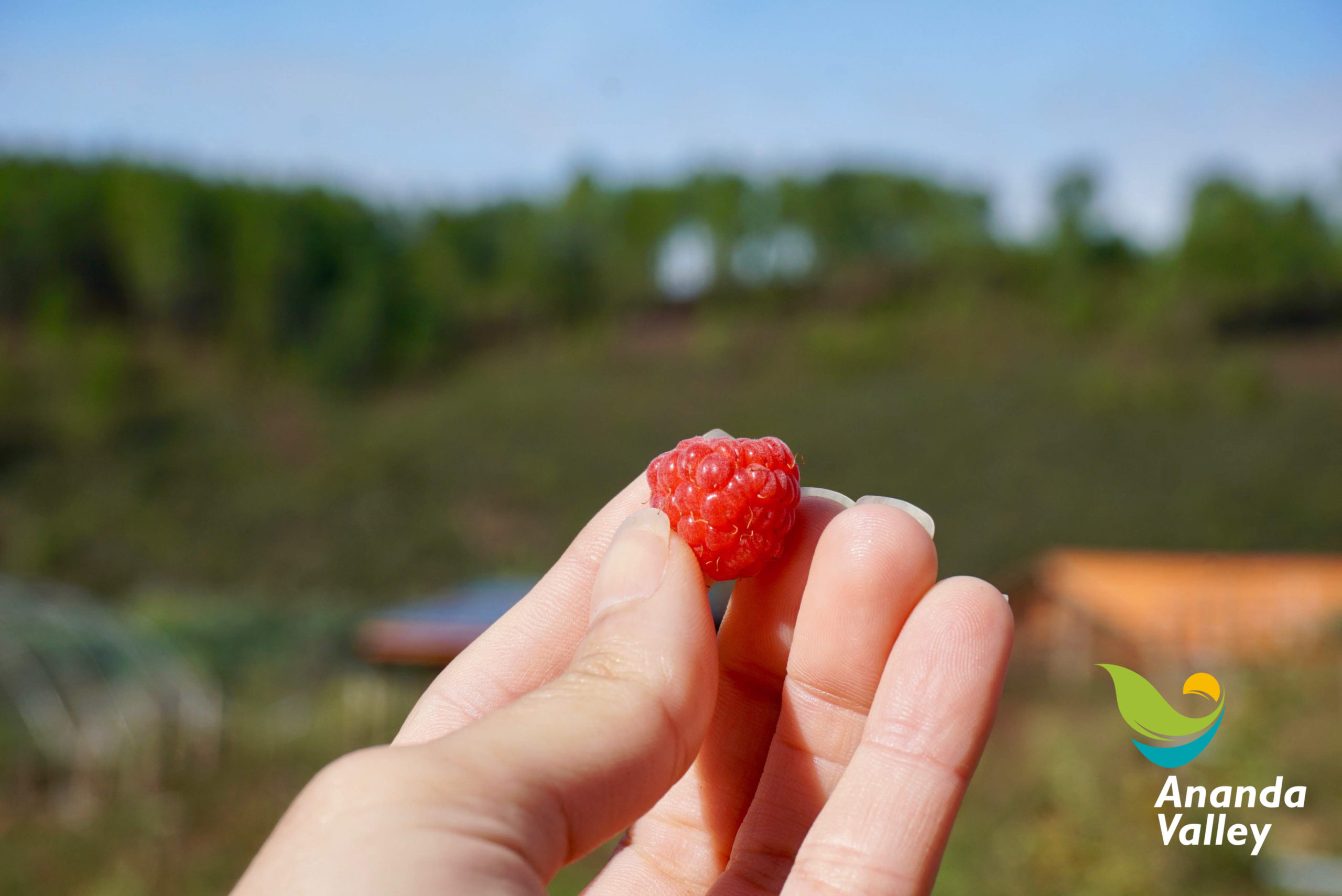 CURIOSITIES OF OUR LAND: RASPBERRY

Among the so-called small fruits, raspberry is one of the most cultivated species here in Portugal.

And in our farm in Ananda Valley, it was one of the fruits that we started planting from the
beginning.

Exotics, raspberries have a mixture of acidic and sweet juices.  Raspberries are from the rose family, as well as strawberries and apples.

It is a fruit that can integrate various types of sweets and light desserts, which gain color and magic with its addition.

Raspberry vinegar was once a popular remedy for sore throats and a common base for summer drinks, diluted with soft drinks.  Today it occupies a solid space in the preparation of marinades and salad dressings.

Health benefits
One of the most outstanding nutritional properties is the richness in vitamin C.

In early 2012, a team of American scientists from Clemson University in the U.S. announced to the world that the direct application of raspberry extracts in cancer cells of the stomach, colon or chest resulted in their destruction.

The effect is believed to be achieved thanks to the presence of antioxidants, such as vitamin C, but other compounds still to be identified may be involved.  Scientists bet on the consumption of this fruit, whose detoxifying and diuretic action has already been proven.

Vitamin A: is available in the form of carotenes that help to increase the defenses and protect the vision.

Folic acidas the needs of this vitamin increase during pregnancy, raspberries are indicated for future mothers

– Vitamin B7: Contributes to the body to take advantage of folic acid and work in favor of the nails (they grow stronger) of the skin (it becomes more luminous) and the hair (it grows with more vigor).
– Potassium and magnesium.  Potassium prevents fluid retention, regulates blood pressure and tones the muscles.  Regarding magnesium, it keeps bones and teeth healthy.
– Fibre.  Raspberries are rich in pectin, a type of fibre that favours intestinal transit and helps expel toxins.

The process of planting  on our farm:
To be successful in planting, some aspects must be taken into account, as says Alexandre Ferreira, coordinator of volunteers.

It is possible to have raspberries almost all year round in a greenhouse Here on the farm, raspberries stay outside.

And with the climate of the region, the production goes from June to October.

The raspberries are perennial, that is, they last for many years, which makes us plant only once, and then we just have to prune and clean around other herbs that are growing.

To prepare the ground, initially we have to clean well of other herbs, put manure and then make a ground cover around the plant so that others that compete with the raspberries don’t grow.

This year, 2020, we are experimenting for the first time the leftovers from the olive press to make olive oil.

The Cooperativa Agrícola
Dos Olivicultores Do Fundão has given us a lot of this material, which for them has no commercial value, and for us it is great for the land.

We add manure to the soil and also fertilizer that we make with nettles.
From time to time we also buy biological fertilizer.

The planting period here has usually been between November and May.

In areas that have not caught well we sometimes do replantations.

To control weeds we clean well in the winter and put soil cover. It depends a lot on the climate of each year, but normally we use irrigation at the end of May and irrigate until October.

During the peak of summer we have to water every day, more than once a day.

Regarding pruning, we have to limit the number of sticks of each plant, because otherwise they get in the way of each other and don’t produce so much.

And we also have to cut the sticks that have already produced and won’t produce more or that are too fragile and will never produce.

The harvest usually takes place from June to October every year. When ripe, the fruit is released from the solid centre, which remains like a white, hard cone on the stem.

One of the difficulties of small fruits like raspberries is that they are very short in storage. From the third day they start to lose their structure. They are conserved in the cold from 1°C to 2°C, ideally.
After 3 days; if we do not sell or consume, they go to freeze for self-consumption by Ananda Valley residents, or go to make jams.

There are many species of raspberries:

Remontant and non-remontant. Remontant is the name of the plant that blooms continuously throughout the season, or whose flowering is repeated several times a year.

To maximize production several prunings are necessary throughout the year.

Non-removeable is the opposite.  Flowering and production take place only once and in the season itself.

Here we have varieties of both types, but most of them are remant.

There are many legends about the magical properties of raspberries.

A German myth says that a branch of the plant can tame a bewitched horse.

We all who live here are already bewitched. 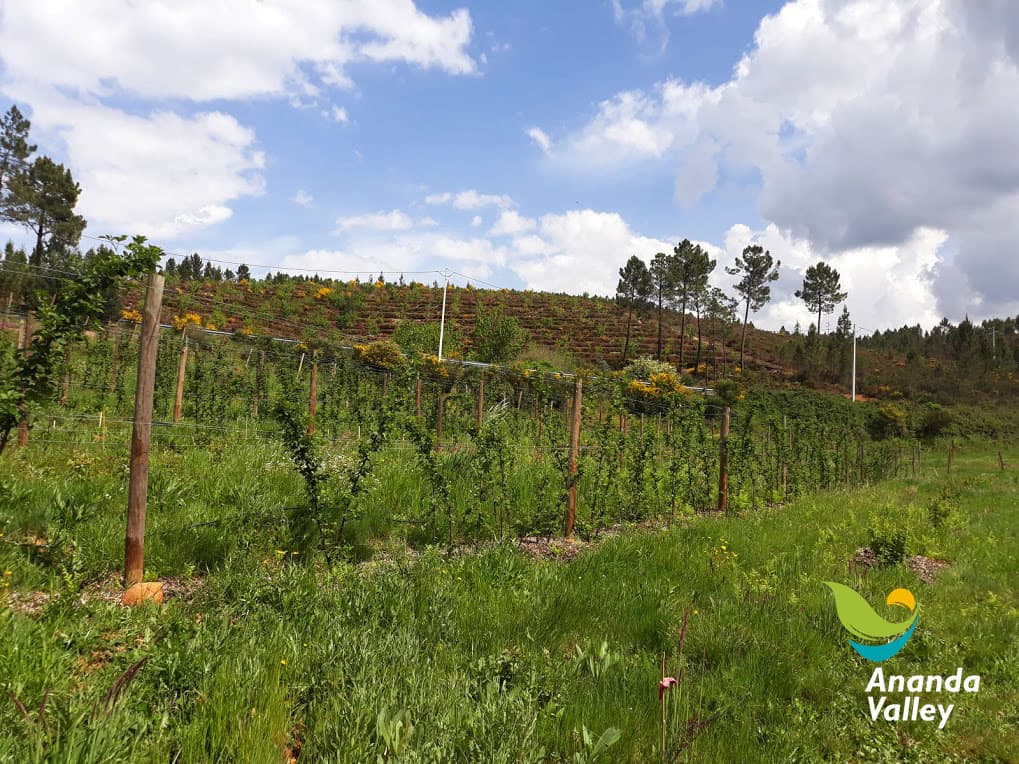